My hometown of Boulder, Colorado, is a very special place. I’ve lived here for 26 years, and have traveled all over the world, yet each time I come home, I’m happy to be here. Now I’m lucky enough to be able to combine my love for my town with one of my other passions: writing.

I’ve just started a regular gig, contributing to RootsRated, an awesome online site that focuses on the outdoor life. I’ll be writing an article a week, highlighting outdoor happenings and fun things to do in Boulder, Denver, and a bit beyond. Already my head is overflowing with ideas. I can’t wait to share them all with you.

For my first installment, I wrote a piece about hiking to the Boulder Star. This iconic symbol lights up the side of Flagstaff Mountain each holiday season, and is a beacon of good cheer for miles around. There’s no better way to celebrate the season than to hike up at dusk, watch the star ignite, sip a hot toddy, then descend with a headlamp to guide you.

I hope you’ll read my article and then take a hike!

Click to it here: Wish upon a Boulder Star 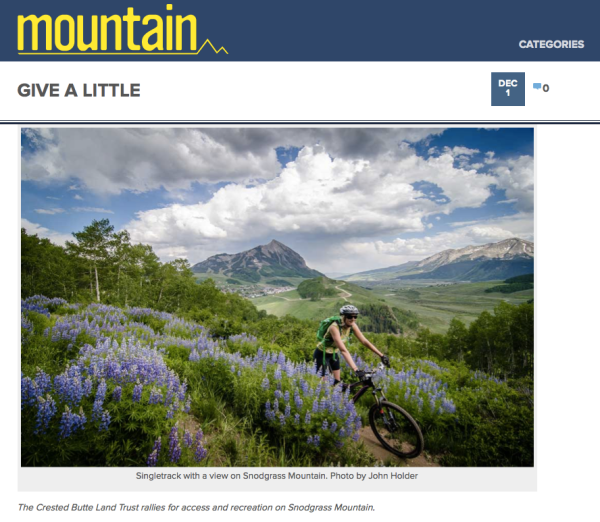 This time of year, it’s easy to get caught up in holiday consumerism. Black Friday, Small Business Saturday, Cyber Monday … the shopping world assaults us with opportunities to spend money on material things. From my perspective, a far greater opportunity exists during this season of giving: Giving back, either by lending a hand to someone in need, volunteering your time, or supporting your favorite cause. Enter #GivingTuesday on December 2, a global day to celebrate generosity and to give.

It just so happens that a key trail in one of my favorite towns in Colorado is at risk of being lost to development—unless the Crested Butte Land Trust can raise $250,000 more by January 15 to purchase the land. For #GivingTuesday, I plan to make a donation to support this cause and protect a gem in my backyard.

How are you going to give back on #GivingTuesday? 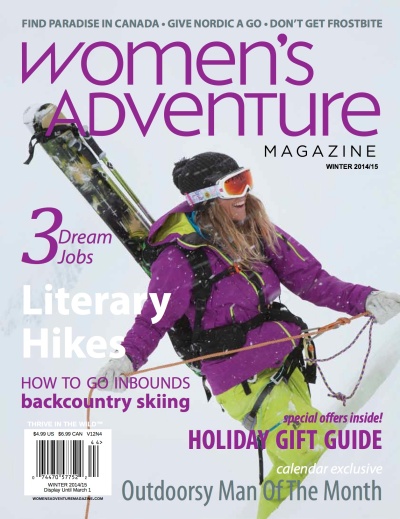 Ski season is upon us! It’s been dumping in the Colorado high country for a couple of weeks now, and everyone I know is itching to bust out their boards and start carving buttery turns.

One key to a killer day in the backcountry is knowing how to organize your pack. It can make the difference between being quick, comfortable, and efficient, or fumbling around and getting flustered. In the latest issue of Women’s Adventure, I’m happy to share tips and tricks for getting your pack dialed. Read my article—How to Load a Backcountry Ski Pack.

Like what you see? Subscribe to Women’s Adventure. Each issue is packed with great articles about getting outside, exploring, and having fun, including Tech Talk pieces like this one to help you learn how to go about doing it.

The idea behind Courageous Creativity is to present stories of courage, creativity, and change from people from all over the world and from all walks of life. The November issue focuses on people who have found their vocation and creative expression in the act of exploring, adventuring, and being with nature… impacting their own lives as well as the lives of others in transformative ways.

I am honored to share my thoughts in this issue. I hope you’ll take a moment and read my interview.

“It takes a special person to think it’s a good idea to do what we do,” says 18-year-old freestyle aerialist Mac Bohonnon.

Earlier this year I learned a lot about the life of a freestyle aerialist from Bohonnon, who was the only American aerialist to compete in the 2014 Olympics.

Aerial skiing is inherently dangerous. Skiers bomb down a ramp at 40+ miles an hour, launch 50 feet into the air, and perform multiple flips and twists before landing on a steep slope. They train first on trampolines and then jump into water pits dozens of times before ever attempting a trick on snow.

Last year I attempted to climb Mont Blanc—and failed. Or did I? After the scent of the peak drifted away—like dreams lost to whimsical wafts of wind—I discovered that it’s about more than bagging the peak. It’s about all the steps along the way, wherever they lead.

The mountains make the rules. My guide quoted, “When you dance with the mountains, they always lead.” And I realized that if you follow their lead, you might just find a graceful waltz that opens a world of adventure and lets your spirit soar.

UK-based Travel Chronicles has just republished an essay I wrote about my experience. Check it out.

I’m thrilled to report that I’ve started contributing to the National Geographic Travel Adventure 101 series, designed to provide ideas and tips to help folks feed their hunger for adventure. Here’s a tease from my first installment:

Magnificent Bonaire stands firmly on a pinnacle, reigning supreme over all other shore diving destinations in the world. With a decidedly rugged character, this charming Dutch island in the southern Caribbean skips chain hotels and instead woos dedicated divers with easy access to underwater wonder. To experience the glorious joy of shore diving in Bonaire, just follow the yellow brick road. Dive sites are as abundant as the fish that dart among the reef’s vibrant coral gardens.

If you’re a diver, you simply must visit this place. Read more on National Geographic Travel.

In front of a standing-room only audience in Boulder, Colorado, on Tuesday, big mountain skier Lynsey Dyer fueled feminine ski stoke with the premiere of her all-female film Pretty Faces: The Story of a SkierGirl. The film didn’t just light a match, it burned down the house, eliciting elated cheers from women who were fired up to celebrate the power of double-x chromosomes nailing double-diamond+ terrain. If the exuberant crowd is any indication, then this flick feeds a hunger that’s been gnawing at the guts of women for years.

I had the pleasure of attending the premiere and writing a review of the film, which I loved. When I shared the review with Lynsey, she said, “You are the first one who really got it! Thank you so much for truly seeing what the project is.”

Read my review on National Geographic Adventure and then go see the movie yourself!

Nguyen Thi Hao, a Vietnamese woman whose thoughts still lingered on an American soldier 30 years after the war.

A stooped, wrinkled Vietnamese woman stares at me with a pleading look, clutching a faded photograph in her frail hand. A prim and proud American soldier beams from the cracked print. “Can you help me find him?” she begs. My heart breaks. We’ve met just moments before, yet already I feel like I have a window into her soul.

I’m curious but filled with trepidation. Having been in Vietnam for only a few days, I’m still trying to rectify reality with images of war from my childhood.

My mind flashes back to 1978—five years after the United States withdrew its troops from Vietnam. I’m a sheltered eight-year-old, sitting wide-eyed in a dark movie theater, watching The Deer Hunter. I had no idea what the movie was about before it started. It is chaotic and terrifying.

The sounds of war ring in my ears. Helicopters spray napalm on a Vietnamese jungle, exploding it into a raging inferno, as villagers scatter, some ablaze. I shudder at the cries of terror. The scene flashes to a sweaty, crazed-looking Christopher Walken jamming a revolver into his temple, forced by his angry Vietnamese captors to play Russian roulette. Later, American soldiers frantically claw their way through a steamy jungle river, trying to stay out of sight, as bullets whizz overhead.

The horrifying scenes burn themselves into my memory and haunt me for decades.

Twenty-four years later, I venture to Vietnam. By this time, I’m 31—well educated, well traveled, and accomplished. I’ve taken a year off work to roam the world with my husband, and Vietnam is the eighth country on our backpacking route. I’ve been cruising on the back of my guide’s motorbike for two days when he says there’s someone he wants me to meet.

We approach a remote outcropping of plywood houses around midday, just as the hot, humid air starts to sap my energy, draping me in a cloak of lethargy. Jungle shrubbery grows in chaotic tangles, conjuring up images of camouflaged troops lying in ambush. Chickens dart across dirty yards. Barefoot children stare at me in curious wonder. A primitive house stands two feet up on stilts, just a faint hint of paint still clinging to its sides.

Then I meet the woman.

“Nguyen twang phao pho ching,” tumbles from her lips. She scribbles a couple of names on a scrap of paper.

“She wants to know if you can help her get in touch with this American soldier,” my guide explains, pointing to the paper.

I look at the photograph. “I’d love to help. How does she know him?” I ask.

“She met him during the war. They were good friends. She wants to know how he’s doing,” my guide says.

“Wow. She’s held onto his photo all this time?” I ask. It’s been 30 years of hard living, and this dear little lady still aches to know what happened to her friend. My mind conjures up a passionate, forbidden affair—him, a scared and lonely serviceman; her, a beautiful young girl, perhaps discovering love for the first time; between the two, a precious human connection that transcends the conflicts of war.

“I’ll look him up when we’re back in the States. There must be a directory of veterans.”

My guide tells the woman what I said. As she listens, her eyes light up and she starts nodding her head excitedly.

He turns back to me. “I don’t meet many Americans. You seem nice and trustworthy, and I thought you’d want to help. That’s why I asked you,” he said.

With that, we smile, wave and say goodbyes in our strange tongues. The silent language of gestures communicates a promise I vow to keep.

I think about this for the rest of the year. When I return to the States, I post a want ad on a Vietnam veterans forum: “I was traveling in Vietnam in March 2002 and met a woman who had known a Sargent Donald Wilkinson during the Vietnam War. Her name is Nguyen Thi Hao (I think). She said she was good friends with Donald during the war and would like to get in touch with him.”

No one answers. The mystery lingers. What happened to Sargent Wilkinson? Was he gunned down in a leech-ridden swamp? Or did he return home from war? Did he marry? Have kids? Did he ever pause in thought, fondly recalling his sweet Vietnamese girlfriend?

Twelve years later, this woman lingers in my mind, putting a human face on Vietnam. She helped me look past the war and see a beautiful country with real people leading real lives and sharing real pain and real joy.

Travel helps us see that people are people the world over, craving human connection. Like a soldier and a lover, or an American traveler and an old Vietnamese woman—our lives intertwine one interaction at a time.

See clips of my published work.